This post is long overdue! A travel post on Paris should have been one of the first Haute Travel posts but to be honest I had no idea where to start. Paris is an amazing city but what makes it so special is the many different subcultures within its different arrondissements. Every neighborhood has its own appeal, its own charm, and its own beauty. I have not visited all of the twenty arrondissements…but I have been to quite a few and in this series I will highlight my favorite three starting with…

Le Marais is an upscale community that encompasses the 3rd and part of the 4th arrondissements. This neighborhood lies on the right bank of the Seine River flanked by Place de la Republique, Place de la Bastille, and Les Halles and is filled with many hidden gems worth searching for at a leisurely pace. On any of its many cobbled stone streets you can find what are known as “Hotel Particuliers”; huge stately residences that have been turned into several apartments. Be privy to see what lies beyond one of the doors to these once massive residences and be amazed by picture perfect hidden courtyards and gardens that would make Martha Stewart jealous. Creatives flock to this area of Paris because of its welcoming feel and bohemian appeal. Marais is to Paris as what SoHo is to Manhattan with one difference it never lost its medieval charm.

For leisurely walks and taking in the many cafes, museums, art galleries, and restaurants Paris offers, Marais is perfect. The shopping is also wonderful with an assortment of specialty shops. Le Marais is a diverse neighborhood that mixes the old with the new yet still manages to maintain a very Parisian way of life. If it is your first time in Paris, Marais is the perfect place to stay since it is near all the iconic landmarks which from this arrondissement are all easily accessible via the metro. Stack up your apartment’s fridge by shopping at the oldest covered food market in Paris, Marché des Enfants Rouges and go hungry! Marché des Enfants Rouges gets its name from the orphan or poor children who wore red, the color of Christian charity. Vendors sell fresh fruits, vegetables, and other delectable can be purchased here…oh and flowers, too! If you are up for something different try one of the Japanese, Moroccan or English {fish and chips} restaurants. Grab a seat and enjoy the hustle and bustle of this loud and busy market. Plan accordingly; the market is closed on Mondays. Jacques Genin is known by the locals not just in Marais but in Paris for hischocolate delicacies. While there, allow you sweet tooth to be satisfied with Jacques pâtes de fruit, caramels and the pâte à choux {cream puff stuffed with cream}.

Not only is Marais home home to one of  the oldest Jewish communities in Paris it is also home of the world’s {supposedly…fallafel connoisseurs are hard to find} best fallafel.  L’As du Fallafel is nothing fancy. Plastic cutlery, a warm welcome, and delicious food. Be prepared for lines. The locals know that this is a sure bet for a good meal and so do visitors. 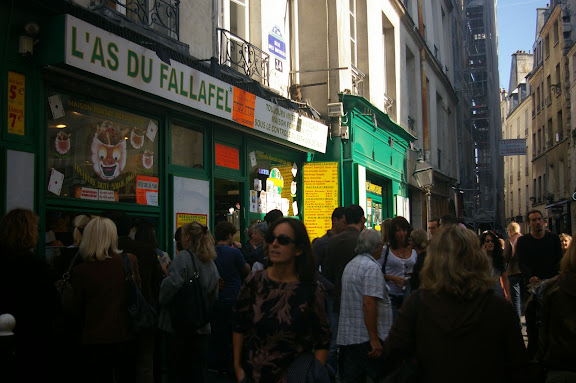 Boulangerie 134 RdT has won le Grand Prix de la Baguette de Tradition française de la Ville de Paris in 2009, 2012, and 2013. It is a big deal. The French take their bread serious.  There is no need to wonder why they have won nce you have made your way to this boulangerie. If bread makes you as weak in the knees as it makes me then this is a definite must while you are in Marais…no while you are in Paris. I am not saying that there are not others in the area that are not just as yummy but why chance it?

What good is bread without the cheese? Parisians eat a lot of cheese and there is no shortage of fromageries but in Marais there is one you cannot miss. Whether you want a mild buttery cheese are something a little tangy and pungent you will find your perfect in this local favorite. You will never eat that orange processed plastic wrapped cheese ever again.

Fromagerie P. Trotte. This shop is pretty small but what you don’t know and what most aren’t privy to {not even the locals} is the cellar {cave} under the store where the cheese are perfected and cared for by the owner. You see the owner is versed in aging and curing cheeses {what better place to get your cheese from?}. If you love goat cheese you are in the right place. I am not a fan of goat cheese but friends say that Pascal’s {that is what the P is for} has some of the best in Paris.

That’s just a taste of what Le Marais offers. In part two I will let you know where to shop, where to eat, and have a little adult fun. Thanks for indulging my love of Paris by stopping by! Au revoir…for now! P.S. There will be other countries but because Paris is my other love…it comes first!